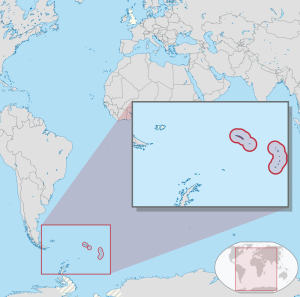 I landed two of this month’s three big DXPeditions (on this side of the planet, anyway).  K5P and VP8SGI are now both in the log.  I just worked VP8SGI (South Georgia Islands) on 17m.  Greyline does magic for the compromise antenna (a ZS6BKW) that I’m rocking @ 500W.  I literally cannot wait for The Tower Project to continue progressing (details below).

I was watching the pack on the panadapter, and observing how much sway the cluster has on their behavior.  They were listening 18.130 and running split 18.135 to 18.145.  A spot came through “QSX 18.138.2” and much of the pack takes the bait… they jump right there, despite the fact that the last five or six he’d worked were 3 kHz up from there.  Many others sit right at the bottom of the split, right at 18.135.  Again, watching the panadapter, he wasn’t working anyone in those tangles of callsigns.

I honestly feel like having been on the other side of small pileups (minuscule by comparison) has made me a more effective DXer.  Maybe the experience of being behind a NPOTA pileup will help others?

In other news, I spent the better part of the day with the tower installer, K7EDX.  We surveyed the spot where the tower is headed, relocated 80′ of Rohn 55G from across the valley to my property, made several decisions about parts and placement, and spent an inordinate amount of time BS’ing about DXing, antennas, work, etc.

In the next week, I’ll place an order for additional tower bits, including new bolts, new masting, and guy lines.  I’ll also receive the M2 40M4LLDD 4-element 40m beam and 17m tuning elements for that.  I should also receive both feedline in both 50 ohm and 450 ohm flavors with the DX Engineering “Special Line Transformers” to make the two play nicely together.

Managed to work the K5P Palmyra DXPedition on 3 bands (12m, 15m, and 20m), all phone.  This was due, in no small part, to horrible illness that Lauren and I picked up.  We skipped our vacation to Costa Rica and enjoyed a round of antibiotics and stomach flu, instead… which meant I was in the new shack instead of on a TI2 beach.

I didn’t manage to nab the VP8STI South Sandwich DXPedition, but I’m looking for the on South Georgia.

The K5P Clublog OQRS just went up and I went to both support them and get confirmation.  Paypal errored out and provided me a pretty humorous fail whale:

[Update: and a pretty funny success message, too!] 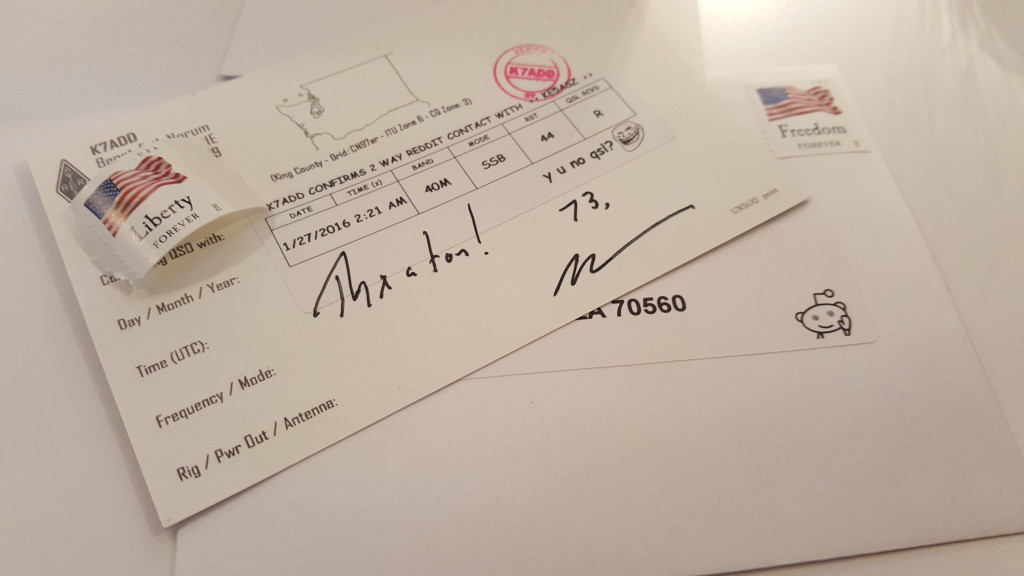 Card for a fellow Redditor 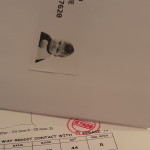 Having posted about the new QSL cards, I thought it was worth a followup on the process I used to burn my first 850+ cards in a year or so.  I’ve been “chasing paper” (seeking awards) and keeping my confirmed : worked ratio high has been a constant challenge.  LoTW is awesome, but some DX just don’t upload.  I also send cards for people’s first HF contacts, particularly memorable contacts, two-way QRP contacts, and to users of the Reddit /r/amateurradio subreddit.  Reddit users get a meme or two on the QSO detail label and the Reddit Snoo on outbound label.  I put a “success kid” meme on the return SASE label.

I receive a large number of cards from the 7-land inbound QSL bureau, especially from JAs.  The process of completing cards by hand can be enjoyable, but quickly becomes tedious, when working through a bureau batch by hand.  Sitting with a laptop, cards, and a pen looking up one callsign at a time, is slow and somewhat infuriating.  Doing this while watching bad TV only helps so much.

After attempting printing directly on the card and failing miserably, I gave up and bought a label printer.  I selected the Brother QL-700 and have been happy with it.  If I were to purchase it today, I’d spring for the QL-710W wireless version (or maybe the one with wired ethernet).  It took a little fiddling with DXKeeper to get the in-app printed labels working well, but after I got it figured out, it became a really quick matter to knock out a stack of 100 cards.  I recently started tracking my JCC progress and, as a result, sent a 4 lbs box directly to the JA inbound bureau, skipping the ARRL outbound bureau.  No way I would have done this by hand.  As an aside, I found that the LiteTite DK-1201 labels are easier to handle and much cheaper than the Brother branded ones.

It took some fiddling to get the DXKeeper “QSL Config” for “Single Labels” figured out, but I eventually got it.  Included here for those who might be looking for the same. 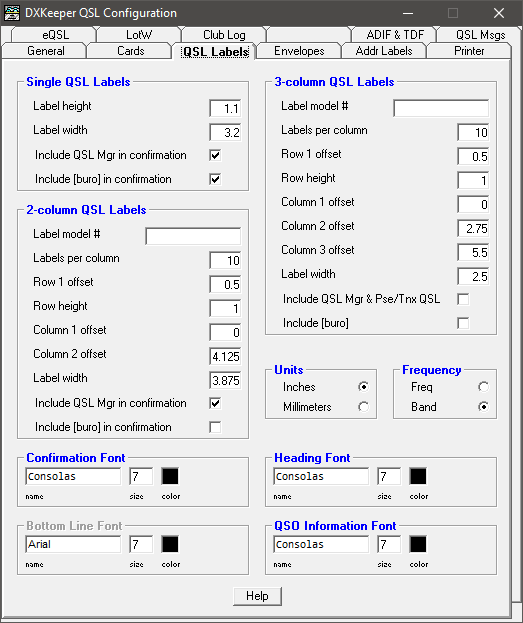 This, plus a massive box of #5.5 envelopes, postage stamps, “green stamps” ($1 bills for DX return postage), and a “Verified By” Stamp (Produced by “Rick, The Sign Man”) round out my arsenal.

After playing around with the “P-Touch” software that came with the label printer, I thought it might be fun to include some more personality than the standard DXKeeper produced labels. I realized that it’s native database format were stored in .mdb files (Microsoft Access).  A bit more playing and I came up with a process that would let me print QSOs from P-Touch and use DXKeeper as the backing database (keeping it updated as I printed them).  I’ve attempted to outline this below.

END_OF_DOCUMENT_TOKEN_TO_BE_REPLACED

While I was happy with my last QSL cards, \I’d blown through almost 1000 cards needed some new ones.  I figured I’d learn from my mistakes and do something a little unique.  At the rate I use cards, the risk of doing something that doesn’t quite work is pretty low.

My last cards seemed pretty sterile and I wanted to do something quirky and a little “gritty”.  I’m sure I achieved that with the design, but I’m not super happy with the finished product, as printed.  I used UX5UO and the printing is great, but the glossy finish sort of deceives the slovenly aesthetic I was going for.  His pricing is great, they shipped quickly and they’re well printed.  I might use them again, next go round. 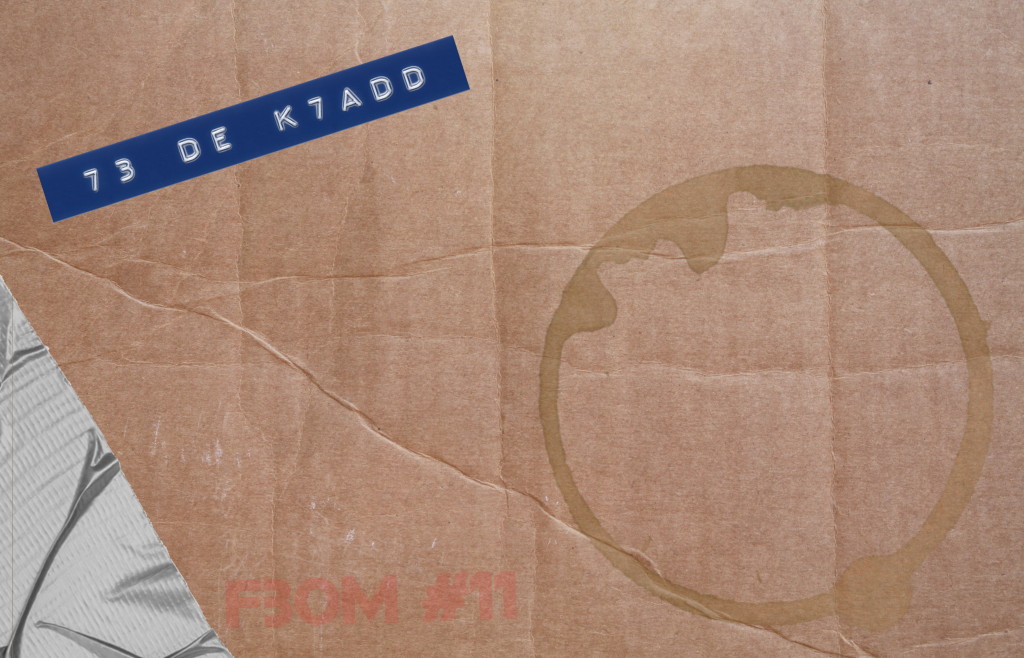 I’ve also nearly perfected the QSL factory with printed labels for card, outbound envelope, and return envelope, a little “verified by K7ADD” stamp, and a hand signature and handwritten note.

I’ll write more about the full process later and a hack to put cute little memes on the labels for fellow users of the Reddit /r/amateurradio subreddit, later.

Results first. Much better showing than my goofing around, a couple years ago.  Single op, assisted, low power:

Amazing what a difference time makes.  Ironically, it was the same power (100W), as the contest is limited to Low Power entries, and the same antenna (ZS6BKW), as I’m taking down the SteppIR in preparation for The Big Tower Project®.  I didn’t spend the full allowed 10 hours in the chair (probably closer to 6.5) and I didn’t scrub my logs at all.  I know I busted calls.  I could see them in the log, right afterward, but am using this as a test of my skill, not my ability to figure out calls later.  I also wasn’t strict about breaks, so there aren’t clear 30 minute gaps in my log… we’ll see what the scoring does to that 21.7k number.  I filled in a ton of 40 and 80m WAS gaps and I have line of sight on 5BWAS now!

I spent the majority of the contest search and pouncing, as without gain… running was futile.

I had a blast… and isn’t that the point?