As I said back in April, I hadn’t planned on becoming a paper chaser. Now that I’ve started to track my “accomplishments,” it’s become kind of fun to chase the states I’m missing. I’d already gotten hooked on chasing DX and had been tracking the unique entities I’d contacted, but recently I’ve been paying attention to domestic contacts, too. 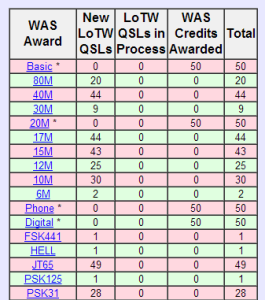 In the past four months, I’ve been awarded mixed phone and mixed digital and I’m much closer on several band-specific and mode-specific awards. I’ve got all 50 (but haven’t applied for the award) on 20m phone and I’m only missing Idaho on both 20m digital andfor mixed JT65. Aside from Idaho, I need Hawaii, Mississippi, New Hampshire, and New Mexico on 20m JT65. Theoretically, the right five LoTW confirmed contacts and I can apply for 5 more WAS awards.