I’m visiting my team in Cambridge, MA and brought the KX3 with me. Yesterday, Tuesday evening, I managed to sneak down to an area near the St. Charles river around 7pm Eastern (2300z) and set up on the grass. 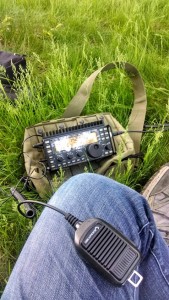 I managed to forget the USB soundcard, so I was working phone, only. It was a great opportunity to test out my new batteries,voltage regulator, and EARCHI end-fed half-wave antenna. The battery (5500mAh LiPo pack) performed tremendously and I’m pretty sure I didn’t put a dent in it with the 45 minutes I was QRV. The voltage regulator (another post) worked perfectly, but needs to be ‘ruggedized’ before I’m confident that it’ll do in less favorable conditions. The EARCHI end-fed half-wave antenna was perfect and didn’t really even need the built in ATU in the KX3. Conditions were quite good and I was able to make a couple short contacts. Got a 57 from a 5-lander in eastern Texas and a 55 from Ohio before the wind and cold got to me. Maybe the YL will be up for a walk and chilling by the water, after she arrives, tonight. I’ve also been playing with software for remote operations and may have found the ideal hotel setup. While travelling, I find myself with downtime and can’t always take a rig with me. While I do intend to get a VU3 license for India, travel to China means I can’t take a radio with me (let alone use it!). I’ve found that remotely controlling my home station can scratch that itch. I’d previously used a combination of Teamviewer to Ham Radio Deluxe and the Remotehams.com RCForb client/server. This was a bit of a hack, but mostly kinda worked. DF3CB has produced FT2000RC, a client/server package for remote operation of the FT-2000, FT-950, and FTDX-5000. It back hauls CAT control, as well as bi-directional audio.

I can’t reiterate how well implemented it is. Bernd has done a fantastic job of replicating the “face plate experience.” While the FT-950 isn’t 100% implemented (menu functions, for instance), it’s enough to work the station remotely. FT2000RC includes a fantastic DX cluster client that implements a very slick “click to tune” and prefix decoding. My favorite feature, is the split/QSX frame. Two clicks and I’m “up 3? or “down 5.”

I managed a quick 17m contact with W1AW/0 in Nebraska before it flipped over to W1AW/0 in South Dakota. Now to pick up South Dakota, hopefully on several band-modes. I’m travelling through Wednesday and 5/21 (UTC) and would likely miss South Dakota entirely, without remote operations. Even if I worked them portable /1, it wouldn’t “count.” Recent uploads have brought me to: Your total number of contacts with W1AW portable stations is 162. If you’re not a Yaesu user, check out his remote audio package, remaud. It seamlessly inter-operates with FT2000RC, but works incredibly well on it’s own, too. In other news, I’ve officially got 100 DXCC entities confirmed (and awarded) in LoTW and should have both “Basic” and “Phone” awarded when they finish checking my cards. On to the endorsements!

DXCC (LoTW only) stats behind the break.