As I departed Manihiki on the little Embrair 110, I found found myself reflecting on my time on the atoll, the people I met, my experiences, and my first real DXPedition.  I scrambled to retain the incredibly positive and optimistic feelings I had.

This tiny little island has left an indelible mark on me and the time off the air will have a lasting effect, far beyond anything I had expected. In this context, I won’t expound on that topic to any great length, but there are a few things I’d like to share with DXers and DXPeditioners.

I’m a new ham and this hobby has provided me with life experiences that I simply could not have expected. My goal in this prologue is solely to encourage reflection on the art of radio and encourage hams to take a more active stance in furthering it.

The US agency that governs our use of RF spectrum, (the FCC) states that the sole purpose of amateur radio is to “foster international goodwill.” Over the course of the last year, I have learned that this purpose is an apt goal and that we have been provided with a unique opportunity to do that. There are hams everywhere. This fraternity has afforded me tremendous gateways into their knowledge, their experiences, and into their lives. I can only endeavor to do the same for others, in the future.

On this trip, I made new friends. I established enduring friendships with people around the globe. Some of these were fellow DXers trying finding the right conditions to get in my logbook, some were with those that reached out to help in unexpected ways, and some with those that tried new things solely because I was doing them. These friendships span across the gap of modern communications and the RF technology I’ve learned to love so much. I used low latency satellite back-hauled WiFi on one of the most remote islands on the planet. Hams sprung out of Twitter and Skype with signal reports from an informal pilot network in France, Bulgaria, Germany, Japan, the US, and neighboring islands. I came out here with support from a small existing team, hams back home that I knew “had my back.” I left with a whole new one, hams I hope to meet in person someday. 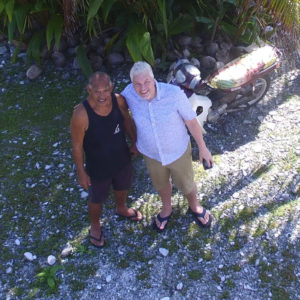 During the mid-day propagation hole (more on that in a later post), I spent time with an older ham who has been off the air for a long time. Our early conversations were focused on orienting him to his new radio, getting him re-familiarized with abbreviations and prosigns, etiquette, and technique. As he became more proficient, he would operate on his own and I’d just answer questions. Over time, our conversation shifted to the history of the island, local plants, and his life on the island. My time with him were the most rewarding moments on the island. Watching him complete his first CW QSO in more than 20 years, calling CQ and having someone come back, and listening to him talk about how much he loves the island.

I came to an island I never would have known about had I not been a ham. I interact with intelligent, creative, and thoughtful people I would never meet were I not a ham. I spent time with a man that opened up a view into his life, because we are hams.

I had an incredible experience, because of my interest in this silly hobby.