Prior to the shack-relocation and remodel, I was using a 2-element SteppIR at ~30 feet and a ZS6BKW at ~55 feet.  With the move inside, I’ve compromised and I’m only using the ZS6BKW (relocated – now broadside E/W @ ~70 feet with the help of W7ECK).  This is about as simple as it gets.  One rig, one tuner, one amp, one feedline, and one antenna. 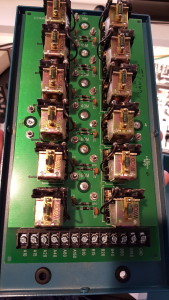 Over the last I’ve been amassing parts for the upcoming tower install.  Calling it a “tower install” belies the complexity associated with what I’m attempting to do.  Accompanying the tower install is the installation of two new beams (M2 KT36XA and an M2 40M4LLDD), new feedline (450′ worth), a new rotor, new rotor control cable (also 450′ long), a new rotor controller, a new remote switch with 350′ of control cable, a new switch controller and band decoder, a new ingress panel for the house, new shack grounds, and new wire antennas on top of the hill. The list of moving (and fixed!) parts is pretty daunting, especially given my neophyte status; I’m learning as I go.

Today, I received an Array Solutions Six-Pak antenna switch and Rat-Pak (also from Array) push-button controller.  The goal is to leverage the 2 beams for 10m/15m/20m (KT36XA) and 40m/17m (40M4LLDD w/17m tuning elements) and then wires for 30m/60m/80m/160m.  I’m keen to ensure that this is both as close to “set it and forget it” as I can and something I can work remotely.  I landed on the Six-Pak as it’s well regarded (eham reviews, et al), super simple, and quite common.  The controller was a little less clear, but I wanted to be able to override the band-decoder (maybe I’ll want to use the wires for 40m, sometimes) and run it remotely.  With the eventual goal of SO2R or Multi-Multi I liked the “ShackLAN” stuff between all the Array devices.  I thought what I’d ordered had an integrated band-decoder. 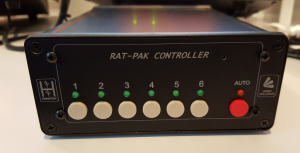 Unboxing the controller, I found a well made case with nice silkscreens, good build quality … but missing the DB9 I’d expected.  A quick call to Jim and Jay at Array Solutions and we figured it out.  I want the “Rat-Master” controller.  What’s the difference?  From all I can tell, it simply includes the band decoder.  Strangely enough, it’s exactly the same price. 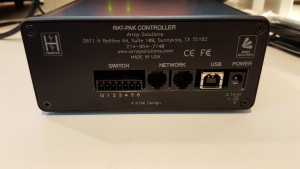 This mistake on my part was solely as a result of the lack of clarity and completeness of their website.  For a company that manufactures their own (incredibly solid and well regarded) equipment and retails high value parts, why is their website so bad?

In fact, there’s a huge gap in the amateur radio web-retail business.  Almost all retail amateur radio storefronts are miserable.  Try to find something on Force 12’s site.  DXEngineering sells a very clever pair of 9:1 current baluns that let you use 450ohm ladder line for transmission with negligible loss.  Good luck finding that without a part number (hint, it’s under “Antennas”).  Good thing they’re so friendly and helpful, on the phone.

I’m starting to get excited about the install!